A Survey scale is an ordered series of response options, presented verbally or numerically from which the respondents select to indicate their level of feeling about the measured attribute. More properly this type of questioning calculates a composite score of a number of questionnaire questions that each measure the same attribute.

This guide will teach you the following types of survey scales:

A dichotomous scale is a two-point scale that presents options that are absolutely opposite to each other. This type of response option does not give the respondent an opportunity to be neutral on his answer to a question.

Three-point, five-point, and seven-point scales are all included in the umbrella term “rating scale”. This questioning provides more than two options, in which the respondent can answer in neutrality over a question being asked.

A semantic differential scale is only used in specialist questionnaires in order to gather data and interpret them based on the connotative meaning of the respondent’s answer. It uses a pair of clearly opposite words, where the respondent is asked to rate an object, person, or any concept by putting a mark on one of the spaces along each dimension.

Examples of a semantic differential scale: 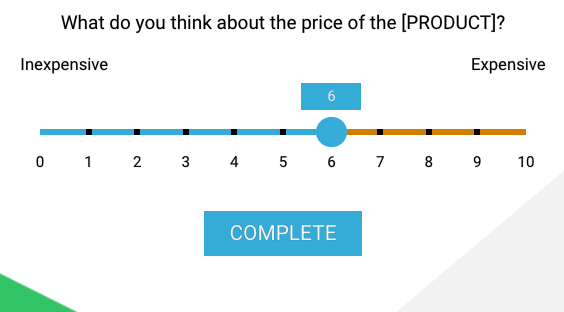 Try out Rating and NPS question types in Pointerpro.